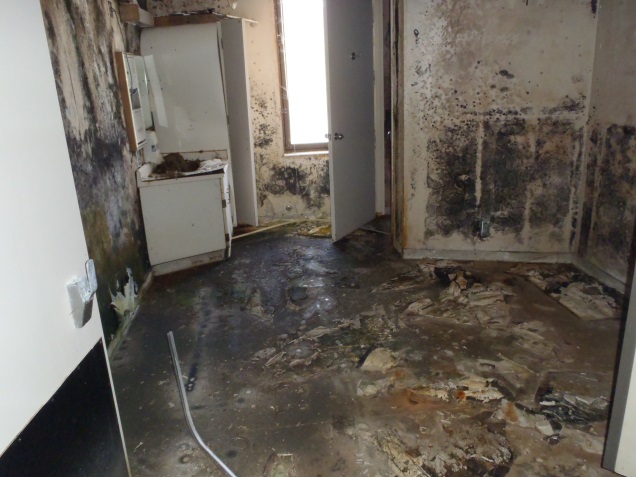 It was a hot August day when I first saw the building—fenced off and surrounded by brown, crunchy grass, it was a five-story building with boarded-up windows and broken glass. When I finally got to enter the building, I suited up in Tyvek™ and a respirator. Most of the debris that had accumulated over the years had been removed, so I noticed the walls, or what was left of them, first. Moldy walls, sheet rock drooping from the building’s structure; ceiling tiles had fallen to the floor from the weight of years of rainwater percolating through the building, creating a squishy carpet under my feet. The story of the Dimmick Tower is one filled with memories: loss of loved ones, new life, sorrow, disappointment, dilapidation, and finally a new chapter. I entered into the story of Dimmick Tower only at the conclusion of its life. 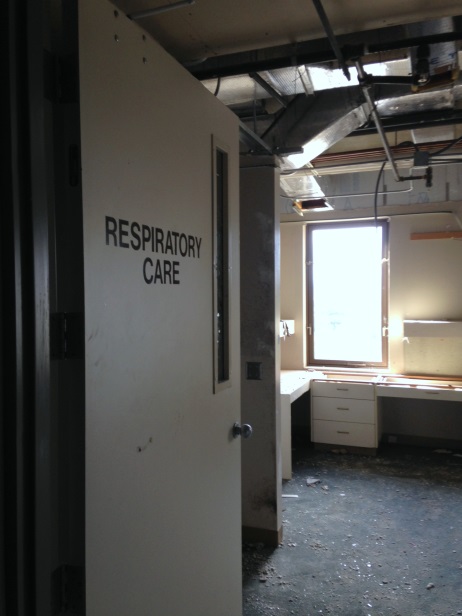 As I walked through the building, I felt as though I had stepped back in time—old equipment was still in place, sinks and tiles dating the building. I tried to imagine the many people who had walked the halls of the building, but my imagination was oppressed by the utter disrepair of the place. I passed a room for Respiratory Care and I couldn’t help but note the irony of it; part of my job there was to keep close track of the air quality around the building during the abatement, removal of asbestos and lead-containing materials, and demolition of the dilapidated but venerable structure.

The Dimmick Tower was built in the 1960s and was part of the main hospital complex for Josephine County (the County) in Oregon until it closed down in the early 2000s. The building, owned by the County, was still structurally sound when it was abandoned; however, without property maintenance, the building fell into a state of disrepair. A roof leak, left unrepaired, caused the top floor ceiling to crumble, and water damage spread from the roof to the second floor. The situation reached the point where it would have cost more for the County to repair the building than to have it demolished. Unfortunately, neither option was feasible for the budget-strapped County. So the building remained and attracted unwanted visitors day and night. 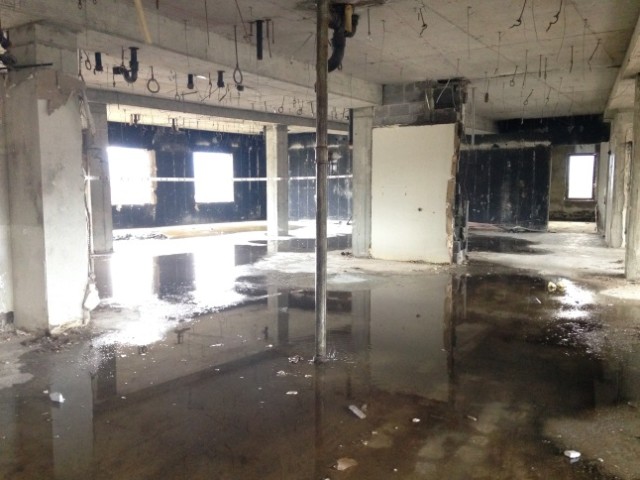 Eventually, the building deteriorated to a point that the police would not enter it. The County’s concern for liability issues increased and a chain-link fence was eventually constructed around the building. Unfortunately, the fence did not prevent unwanted visitors from entering the building; the County’s liability decreased but was not eliminated. The eyesore remained but provided no benefits to the surrounding community.

With the help of MFA, the County was able to apply for a Business Oregon loan to clean up this brownfield site. After numerous community involvement meetings and much planning on the part of the County, MFA, and Business Oregon, the project was finally kicked off. Part of my role as a member of the project team during the demolition process was to monitor the air for asbestos at locations surrounding the Dimmick Tower. The community health department, housed in a building adjacent to the Dimmick Tower, continued its normal 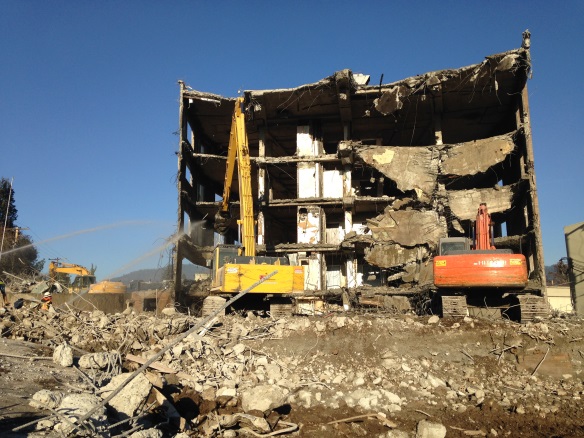 operations throughout the demolition process, and there were concerns regarding the potential for exposure of the health department employees and the public to airborne contaminants. Careful planning and effective safety procedures were implemented and at as a result we found no air quality exceedances in the 630 perimeter samples taken.

Floor by floor, the interior abatement and demolition were completed, and I could stand on the top floor of the building and look out at the beautiful mountains surrounding Grants Pass. When I had a chance to breathe (in the freshly cleared area), I enjoyed the wonderful view all around me.

Once the exterior demolition started, opportunities to indulge in mountain-watching came to a screeching halt as the project moved into its next stage: the controlled destruction of a five-story building. My role on site morphed from asbestos monitoring to dust monitoring, while I continued to perform general oversight. My oversight responsibilities allowed for conversation with the many pedestrians as they stopped to observe the action. As we 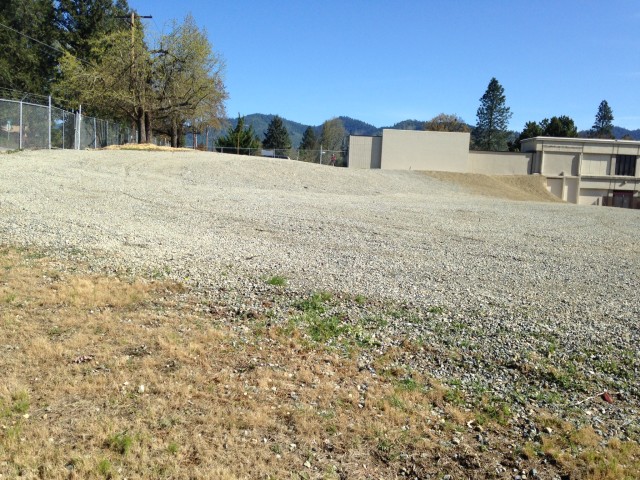 watched the building slowly transform into a pile of rubble, I got to hear many stories of love and loss at the Dimmick Tower from residents of Grants Pass. The State of Oregon may be riddled with pockets of land that are a blight to their communities, but rarely do these brownfields have such a strong place in the hearts of the community members. Now there is an open parcel of land where the Dimmick Tower once stood, ready to serve the community once again. It is a blank slate, waiting for the next round of memory-making.

Follow this link to view a time-lapse video of the controlled demolition, courtesy of the Grants Pass Daily Courier.